PERSB to contest all state seats 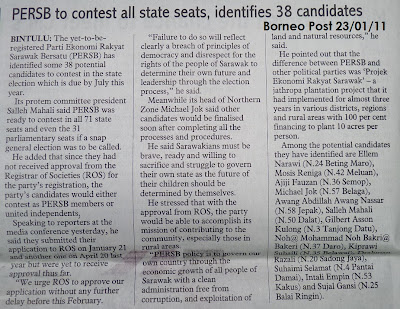 BINTULU: The yet-to-be registered Parti Ekonomi Rakyat Sarawak Bersatu (PERSB) has identified some 38 potentials candidates to contest in the state election which is due by July this year.
Its protem committee president Salleh Malahi said PERSB was ready to contest in all 71 state seats and even the 31 parliamentary seats if a snap general election was to be called.
He added that since they had not received approval from the Registrar of Society (ROS) for the party's registration, the party's candidates would either contest as PERSB members or united independents.
Speaking to reporters at the media conference yesterday, he said they submitted their application to ROS on January 21 and another one on April last year but were yet to receive approval thus far.

"We urge ROS to approve our application without any further delay before this February.
Failure todo so will reflect clearly a breach of principles of democracy and disrespect for the rights of the people of Sarawak to determine their own future and leadership through the election process," he said.
Meanwhile its head of Northern Zone Michael Jok said other candidates would be finalised soon after completing all the processes and procedures.
He said Sarawakians must be brave, ready and wiling to sacrifice and struggle to govern their own state as the future of their children should be determined by themselves.
He stressed that with the approval from ROS, the party would be able to accomplish its mission of contributing to the community, especially those in rural areas.
"PERSB policy is to govern our won country through the economic growth of all people of Sarawak with a clean administration free from corruption, and exploitation of land and natural resources," he said.
He pointed out that the difference between PERB and other political parties was "Projek Ekonomi Rakyat Sarawa' - a jathropa plantation project that it had implemented for almost three years in various districts, regions and rural areas with 100 percent financing to plant 10 acres per person.
Among the potential candidates they have identified are Ellem Narawi (N24 Beting Maro), Mosis Reniga (N42 Meluan), Ajiji Fauzan (N36 Semop), Michael Jok (N57 Belaga), Awang Abdillah Awang Nassar (N58 Jepak), Salleh mahali (N50 Dalat), Gilbert Asson Kulong (N3 Tanjong Datu), Noh @ Mohammad Noh Bakri Bakeri (N37 Daro), Kiprawi Suhaili (N35 Belawai), Drahman Razali (N20 Sadong Jaya), Suhaimi Selamat (N4 Pantai Damai), Intali Empin (N53 Kakus) and SUjal Gansi (N25 Balai Ringi). - Borneo Post
Also read:
* James Masing's advice on Jatropha
* Is it unwise to plant jatropha in Sarawak???
* NEWS FLASH - Q&A by Parti Ekonomi Rakyat Sarawak Bersatu
* NEWS FLASH - Press Release by Parti Ekonomi Rakyat Sarawak Bersatu
* PARBS, Parti Peace dan Parti Ekonomi Rakyat Sarawak (PERS)
Posted by Sebanaku Sarawak at 12:01:00 AM

Email ThisBlogThis!Share to TwitterShare to FacebookShare to Pinterest
Labels: PERSB