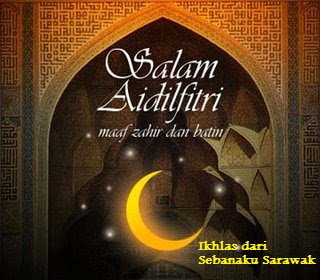 Eid ul-Fitr, Eid al-Fitr, Id-ul-Fitr, or Id al-Fitr (Arabic: ‎عيد الفطر ‘Īdu l-Fiṭr), often abbreviated to Eid, is a Muslim holiday that marks the end of Ramadan, the Islamic holy month of fasting (sawm). Eid is an Arabic word meaning "festivity," while Fiṭr means "breaking the fast". The holiday celebrates the conclusion of the 29 or 30 days of dawn-to-sunset fasting during the entire month of Ramadan. The first day of Eid, therefore, falls on the first day of the month Shawwal.
Eid-ul-Fitr has a particular sholat (Islamic prayer) consisting of two raka'at (units) and generally offered in an open field or large hall called an Eed-gah.[1] It may only be performed in congregation (Jama’at) and has an additional extra six Takbirs (raising of the hands to the ears while saying Allah-u-Akbar [God is Great]), three of them in the beginning of the first raka'ah and three of them just before ruku' in the second raka'ah in the Hanafi school.[2] This Eid ul-Fitr salah is, depending on which juristic opinion is followed, Fard (obligatory), Mustahabb (strongly recommended, just short of obligatory) or mandoob (preferable).[1]
Muslims are commanded by God in the Qur'an to complete their fast until the last day of Ramadan[3] and pay the Zakat al-fitr before doing the Eid prayer. (Source: Wikipedia)
Posted by Sebanaku Sarawak at 3:44:00 PM 8 comments:

Luyang rep takes the state government to task for failing to protect the rights and interests of Sabah.


KOTA KINABALU: A motion asking the Umno-led Barisan Nasional state government to demand increased payment of the petroleum royalty to Sabah has been rejected by the State Legislative Assembly Speaker, sparking accusations of cowardice from an opposition member.
Luyang state assemblywoman Melanie Chia took the state government to task for failing to protect the rights and interests of Sabah, now the poorest state in the country.
She said this was evident from the rejection of her motion requesting the state government to review the agreement on the petroleum royalty and demand it be increased to 20% from the current 5%.
Read more »
Posted by Sebanaku Sarawak at 10:45:00 PM No comments:

The opposition bloc’s budget targets Bernas, the company owned by tycoon Syed Mokhtar Al-Bukhary, which has a commercial chokehold on rice.

Pakatan Rakyat has promised to end national rice company Bernas’s control over the industry as part of its budget plans in a bid to stimulate yields and create competitive prices to improve income for farmers.

“Pakatan will end Bernas’ monopoly and its position as the sole rice importer will be reviewed and import licence will be opened to create competition,” PKR leader Tian Chua told reporters here.
Read more »
Posted by Sebanaku Sarawak at 10:08:00 PM 41 comments:

Ampang MP Zuraida wants Sarawakians to defy the police by continuing the march... 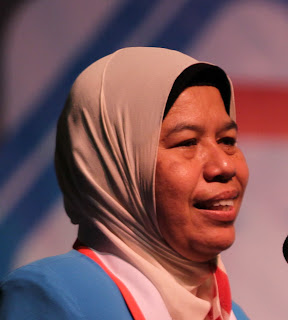 "...(but) I will not be around to join them,” Zuraida said.
See sees red as govt denies MoCS right to gather
Posted on August 13, 2011, Saturday


KUCHING: Parti Keadilan Rakyat (PKR) state publicity chief See Chee How yesterday strongly denounced the ‘abuse of power’ by the government by checking the people’s rights to hold a peaceful gathering.
“We (PKR) are disappointed with such actions. All Malaysians have a moral and righteous duty to safeguard their constitutional rights and demand good governance from the elected government,” he told a press conference.
Read more »
Posted by Sebanaku Sarawak at 12:01:00 PM 10 comments:

UBF: Sabah must get more from new oil finds

Sabah must get more from new oil finds’
Queville To | August 8, 2011fmt


With the new oil and gas finds in Sabah, it is imperative that the deal with Petronas is revisited, says Jeffrey Kitingan.
KOTA KINABALU: Jeffrey Kitingan today claimed that state Barisan Nasional leaders stopped making a fuss about the meagre oil royalties from Petronas once their ‘associates’ had been awarded lucrative contracts by the national oil company.
Disclosing this, Borneo Heritage Foundation (BHF) leader Jeffrey said: “Sabah BN leaders should also stop paying lip service and for once seriously consider the interests of the state and the plight of the poor citizens.
“The time is up for these leaders and for patriotic leaders to rise and demand for the rights of Sabah and its people to be the paramount criteria, especially for the sake of the future generations of Sabahans.”
Read more »
Posted by Sebanaku Sarawak at 12:01:00 AM 3 comments:

Even if I’m alone, I will be there on Aug 13
to unveil our 10-point declaration
which contains the people's will,
declares Francis Siah !!!


This is the full text of Malaysiakini writer Keruah Usit’s email interview with MoCS leader Francis Paul Siah.
1. Do you think the support given to Bersih 2.0 by many citizens and bloggers, during and after July 9, will make it easier to encourage Sarawakians to take part in the August 13 walk for democracy in Kuching? How many participants would you expect to be able to call the Red Rally a success at expressing the people’s will?
Read more »
Posted by Sebanaku Sarawak at 12:01:00 AM 10 comments:

Abang Wahap will solve the traffic congestion problems in the city

“Searching for the ‘soul’ of Kuching City and solving traffic congestion will be among my immediate tasks,” he told reporters yesterday after inspecting a welcoming parade.

Prove your worth in coming polls, PKR tells PPP
Posted on August 2, 2011, Tuesday

KUCHING: Parti Keadilan Rakyat (PKR) Central Leadership Council (CLC) member Zulrusdi Mohd Hol has issued a challenge to People’s Progressive Party (PPP) to contest in the state in the next general election.
He said this would be a way to prove to Sarawakians that PPP vice-president Datuk Nik Sapeia Nik Yusoff was not talking rubbish when he said that PPP could whack peninsula-based opposition parties in the state.
Zulrusdi, who is also PKR Petra Jaya divisional chief, said Nik Sapeia’s statement held no ground at all when the party itself was rejected by the rakyat in Semenanjung.
Read more »
Posted by Sebanaku Sarawak at 12:01:00 PM No comments:

To All Muslim Readers, 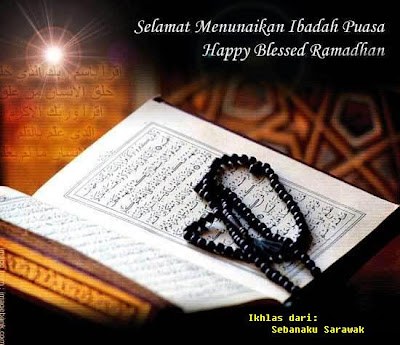 Ramadan (Arabic: رمضان‎ Ramaḍān, Arabic pronunciation: [rɑmɑˈdˤɑːn]) (also Ramazan) is the ninth month of the Islamic calendar, which lasts 29 to 30 days. It is the Islamic month of fasting, in which participating Muslims refrain from eating and drinking during daylight hours and is intended to teach Muslims about patience, spirituality, humility and submissiveness to God. Muslims fast for the sake of God (Arabic: الله‎, trans: Allah) and to offer more prayer than usual. Compared to the solar calendar, the dates of Ramadan vary, moving backwards by about eleven days each year depending on the moon; thus, a person will have fasted every day of the calendar year in 34 years' time. Muslims believe Ramadan to be an auspicious month for the revelations of God to humankind, being the month in which the first verses of the Qur'an were revealed to the Islamic prophet, Muhammad. (source: Wikipedia)