She was lucky to win the state election this month because apparently she didn't perform her duty as an elected representative in her first term!!! 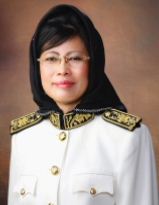