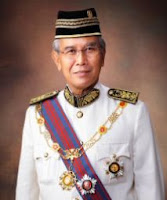 SARAWAK is recommending a ‘4-ha rubber or oil palm per family’ policy for inclusion in the federal government’s development programmes in the next 10 years in the state.


Deputy Chief Minister Datuk Patinggi Tan Sri Alfred Jabu Numpang, who mentioned this at the august House yesterday, believed this could lift the state’s gross domestic product (GDP) to be on par with those of the developed states.

“Four hectres of rubber and 4 hectres of oil palm per family are recommended to the federal government for inclusion in its development programmes for the next 10 years, (that is) to the year 2020,” he said.
Jabu, who is also Minister of Modernisation of Agriculture, was replying a question from Robert Lawson Chuat (BN-Bukit Saban). On rubber, he said the state would assist farmers with high yielding clones introduced by the Rubber Research Institute Malaysia (RRIM) and teach them good agricultural practices. He said the clones are now developed at the RRIM rubber nursery established at the Layar Integrated Agriculture Station in Betong.

As for oil palm, he said hill padi farmers with vast areas of suitable land within the vicinity of palm oil mill are encouraged to venture into large scale oil palm planting.

He pointed out this can be done through government agencies such as Sarawak Land Consolidation and Rehabilitation Authority (Salcra), Land Custody and Development Authority (LCDA) and Felcra Berhad.
“They can also develop their land into oil palm smallholdings which with the prevailing very good price of crude palm oil would give very good income to the farmers,” he said.

On a related matter, Jabu said RM3.455 million has been approved under the

As at last September 30, the total area approved for the project was 1,177 hectares, benefitting 715 smallholders.

“The majority of these areas are in Betong and Sarikei divisions, which are the rubber belt of Sarawak,” he said.
Posted by Sebanaku Sarawak at 5:02:00 AM