Please Do Not MISTREAT People's Representative !!! 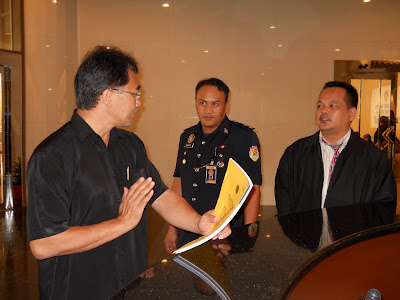 Dominique is seen talking to an unidentified gentleman inside the DUN Building after getting the motions for the sitting while a security personnel closely watching him.

KUCHING: He just could not believed it - he was deterred from entering the State Legislative Assembly building in his capacity as a Sarawakian!!!

Two days ago he was barred from attending the current sitting after he was found guity by the Committee of Privilege (COP) for ridiculing the assembly by equating it with a kangaroo court when it made its decision on a report of the committee on Wong Ho Leng (DAP-Bukit Assek) on May 13 last year.

Ng, who is from Parti Keadilan Rakyat (PKR) was charged with having said: “This is a kangaroo court. Let’s count the kangaroo. Come hop, hop, hop.

He and his fellow opposition colleague Cheong Chien Jen who is from Democratic Action People (DAP) party were suspended for a year with effect from last Monday.

Today, the security personnel had stopped him from entering the building.

In his first attempt which was around 1000am, he and his five supporters had caused a commotion for about 15 minutes at the main entrance of the building when he said he and his supporters wanted to go to the Public Gallery to watch the proceeding of the sitting.

However, he and his supporters relented after being told by the security personnel to get out from the building.

It is said that the instruction was given by the DUN speaker Dato Sri Mohamad Asfia Awang Nasar to stop Dominique from entering the building after he was barred for 12 months by the augusted assembly.

In his second attempt which was around 0300pm, he came to the building under the pretext of collecting the motions for the sitting.

And again, there was a scuffle between the people's representative and the security personnel who were stationed at the main entrance of the building.

When the commotion had attracted the attention of those at the building, Dominique was heard to say he came to the building in his capacity as a member of the public and he was there to take his motions.

He said the security personnel should not treated him in such a disrespectful manner.

One of the security personnel was heard trying to refute Dominique's claim.

The assemblyman later left the premises after he received the documents which he wanted to get.

He, however, was said to drive to the Gita Police State after making an exit from the State Legislative Assembly building to lodge a police report over the incident.
Posted by Sebanaku Sarawak at 8:45:00 PM