UBF : The world declares Sabah as the poorest state.

What has UMNO done with the money??? 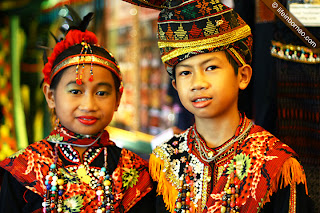 
KOTA KINABALU: The World Bank recently made an embarrassing disclosure that Sabah still remains the poorest state in Malaysia despite 16 years of Barisan Nasional (BN) rule.
Now the opposition wants to know: where have all the funds given to Sabah for poverty eradication gone to?
Luyang state assemblywoman Melanie Chia today fired a broadside at the state government: “It is indeed shocking to learn that although the state has only 10% of Malaysia’s population, it has 40% of the poverty.
“Millions have been spent over the years, but the poor people who were supposed to benefit from these programmes remain poor.”
The World Bank's 2010 Malaysia Economic Monitor report confirms that Sabah is the poorest state in Malaysia and that most Sabahans are still struggling to make ends meet, especially in the rural areas.
Chia said in a statement that the World Bank Report has raised doubts on the effectiveness of poverty eradication programmes to help the poor in Sabah.
She said that in previous State Legislative Assembly sittings she had tried to find out the plans and programmes to raise the growth rate of the state to achieve the high-income status, but did not get any answer.
“With the release of this latest report by the World Bank which revealed that our people are not progressing, I hope the government will stop fooling us and be sincere to the people.
"Giving out money during elections cannot cover up the true situation on the ground. Poor people remain poor and this will not help with the development and progress of our state,” she said.
Low wages
Chia, who is also the Sabah Progressive Party (SAPP) women's wing chief, said that another issue highlighted in the report was the poor salaries paid to workers in the state.
She added that this was precisely the situation in Batu Sapi, where the population remains poor because most of them are working in low-paying jobs. (In the recently-concluded by-election, Barisan Nasional won the Batu Sapi seat.)
Some youths told her that they opted not to work because of the low salary.The World Bank Report has revealed the real situation on the ground besides confirming SAPP's suspicion that much work has yet to be done for Sabah, she said.
“Figures do not lie. The imbalances that we are facing have to be rectified for Sabah to progress as a whole. We cannot say we are successful and have done well when there are still so many poor people in the State,” Chia added.
Posted by Sebanaku Sarawak at 11:23:00 AM