WHO IS TO BE BLAMED FOR THE PROBLEM? 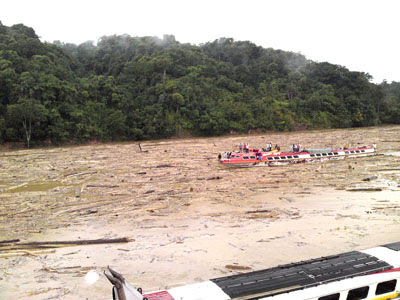 Transport at standstill as debris clog rivers
by James Ling. Posted on October 8, 2010, Friday
KAPIT: Riverine transport here came to a standstill yesterday as a massive amount of dead wood, sawn timber and other debris clogged the Baleh and Rajang rivers from 7am.
NO WAY THROUGH: Driftwood in the river makes it impossible for boats to travel.
Locals called the phenomenon ‘bah tuggal’, which happened after parts of the riverbank is believed to have collapsed, causing havoc among local residents dependent on the river for transport.

As news spread, local residents flocked to the waterfront to see the phenomenon for themselves.
At the Kapit-Sibu Express Terminal, those waiting to pick up relatives and friends from Sibu were speaking anxiously on their phones as no express boats could get through.
Retiree Wasli Nor said a possible explanation could be riverbank erosion in Baleh, which was a logging hub.
“There were massive deposits of dead wood, gravel, and sand,caused by soil and riverbank erosion. Heavy rain may have caused a sudden surge in water level and the deposits collapsed and washed down river,” he said.
Kapit District Council acting secretary Kelimbit Sibat cautioned those dependent on water transport to exercise extreme care, and especially look out for submerged deadwood.
Sergeant Getah Untam, from the Kapit police, said by 3pm the floating debris had reached Sungai Ensilai and was likely to have reached Song by last night.
“Early Friday morning the debris would probably arrive in Sibu. Boat operators should be very careful,” he warned.
Meanwhile, YH Wong said the phenomenon was probably the first sign of more problems to come.
“The water would probably flood Kapit by midnight (today). People should stay vigilant and on guard to get ready for evacuation in case of emergency to higher ground,” he advised.
A local Iban, who wished to remain anonymous, said the rare occurrence was a bad omen.
“It has never occurred over the past 50 years that such a large amount of debris flowed down to completely cover the river, blocking any navigable passage,” he said.
An elderly Chinese man agreed with him, saying this could be the first signal of ‘the end of the world’.
“Because of human destruction to nature. So Mother Nature wants to punish the greed of human activities,” said the man who also requested anonymity.
Posted by Sebanaku Sarawak at 7:22:00 PM

Email ThisBlogThis!Share to TwitterShare to FacebookShare to Pinterest
Labels: Misc