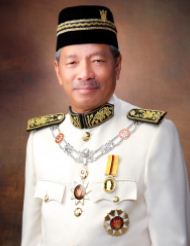 THE Barisan Nasional (BN) government is the most unique system of governance in a multi-racial nation like Malaysia which many countries tried to emulate but failed, said Minister of Land Development Dato Sri Dr James Masing.

As such he said the BN concept, which was incepted in 1974, should not be taken for granted.

“BN is the successor of the Alliance. There are now 14 different political parties in the BN and there are rules and understanding which govern the BN,” Masing said in his winding-up speech at the State Legislative Assembly yesterday.

“Secondly, each political party regardless of its size has the same representation, three members each to its supreme council, the highest decision making body of the coalition and all members have equal say and finally, decisions are made through consensus and consultation,” stressed Masing.

Therefore, no political party should be left out in any decision making process because of its size, Masing, who is also president of Parti Rakyat Sarawak (PRS), said.

He said that through BN, minority groups which do not have the number would be given the chance to stand as candidates.

“A good example is YB Rosey Yunus, a Kedayan from Bekenu and YB Paulus Palu Gumbang, a Bisaya from Batu Danau, both of whom come from the smallest communities in Sarawak.

“If the principles of parliamentary democracy, where majority rule is strictly applied, the Bisayas and Kedayans will have no elected representative in Sarawak.

“But BN system of governance gives venue to the smallest of the group to have their say.

“By allowing the smallest group to have their voice, it means that social justice is part of BN’s inherent values. Any party which claims justice (Keadilan) in its political organisation is a fake copy of what the BN is. Such organisation tends to have a lot of pronouncement but nothing else,” he said.

Quoting William Shakespeare, Masing said the opposition parties in the country were merely a “bag of hot air”.

On another issue, Masing chided Batu Lintang assemblyman Voon Lee Shan who had said “As politicians we should be the guiding force to stop cronyism, favouritism, racialism, corruption, abuse of power and so on and voters talked about politicians as greedy people who are selfish and greedy for power”.

According to Masing, it was members of the opposition who were actually practising these negative virtues.

“Let me start with DAP. Lim Kit Siang is an MP for Ipoh Timur, Perak. His son Lim Guan Eng is secretary general of DAP and an MP for Bagan in Perak. He is also the assemblyman for Air Puteh and the chief minister of Penang. Guan Eng’s wife, Betty Chew Gek Cheng is an assemblywoman of Kota Laksamana in Malacca.

“Karpal Singh is the national chairman of DAP and an MP for Bukit Gelugor, Penang. His eldest son Jagdeep Singh is an assemblyman for Batu Keramat, Penang and his second son Gobind Singh is an MP for Puchong, Selangor.

“In PKR, Anwar Ibrahim is an advisor of PKR, who is the de facto president of PKR. His wife Dr Wan Azizah is the president of the party. His daughter, Nurul Izzah is an MP for Lembah Pantai, Selangor and is now contesting for the post of vice president in the party. Azmin Ali, a close confidant and a personal friend of Anwar is contesting to be a deputy president in PKR and has full backing from Anwar,” added Masing.

He also said that in Sarawak, Wong Ho Leng is an MP for Sibu and an assemblyman for Bukit Assek.

In Kuching, Chong Cheng Jen is an MP and assemblyman for Kota Sentosa.

“To my understanding of the phrase ‘greedy for power’ as said by YB from Batu Lintang, it must include the number of positions a single person holds or a single family controls. Position carries with it authority.

“By extension of logic the numerous positions the Anwar, the Lim, the Karpal Singh, the Wong and the Chong of this country holds, must carry with it authority and power. Power corrupts and absolute power corrupts absolutely.

“Therefore, before this accumulation of position evolves onto Frankenstein or nepotism and cronyism, I concur with YB for Batu Lintang that we must in his own words, “Cure this political illness” once and for all. And before we point at a tiny speck in other people’s eyes, let us pull out the beam from our own eyes first,” stressed Masing.
Posted by Sebanaku Sarawak at 9:05:00 AM